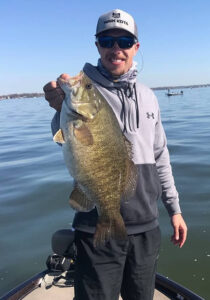 I grew up and still reside in my hometown of Farmington Hills, Michigan. I am 26-years old and currently working as an Environmental Consultant with a bachelor’s degree from Western Michigan University in Hydrogeology and a minor in Group Science. I also have a identical twin, Kyle Jump, who has my by team partner through most of my career. I started fishing at a young age with my father and brother for panfish, walleye and bass. At the age of 16, I started gravitating toward bass fishing as my primary focus and started competing in small local tournaments. My first large-scale tournament was the Michigan Bass Nation State Tournament on Lake St. Clair in 2014 as a co-angler. I finished 26th out of 120 anglers and that really started my drive to pursue my dream in competitive bass fishing. The next step was college bass fishing where I joined the club in 2015, became the club president from 2016-2017 and left the club in 2018 after my final eligible season. During that time, club funding increased by three times along with added members, community outreach and university involvement. Funding allowed club members to have financial assistance and not worry about the financial burden to compete in Michigan and national college tournaments.

In 2017, my game started to come together with a Michigan College Bass Circuit (MCBC) Classic win on Muskegon and White Lake which also carried a automatic berth into the Bassmaster Team Series National Championship. I was unable to compete due to graduation and finals. Following that season, I joined Razr Rodz later that year where I met current owners Rick LaPoint and Mike Garrity. I was fortunate enough to join a great company who had high-performance fishing rods and took care of us. The following season, Kyle and I finished in numerous top 10’s, including three-2nd place finishes in multiple college circuits. Later that season, was fortunate enough to win Angler of the Year in the College Bass Tour (started by KVD and Zona) and Team of the Year in the MCBC. After college, I have been working full-time and competing in Payback Bass, MBN Bassmaster Team Championship Series and other miscellaneous tournaments. In 2020, I was able to capture a win on Higgins Lake for the MBN BTCS.